Visualise your CV on re.vu

Just found a nice tool to visualise your CV online. I was always thinking of showing my CV in an interactive way, but time resources are limited. So this is a nice alternative to give a different insight: Visualised CV in re.vu

We entered the dragon’s den at the European Youth Award 2013 in Graz,….

…. and got eaten. Prepared with our “weapons of choice”, a brave grim mind and a couple of late night slides, we were ready to take a stand in front of the jury and met our fate calmly. ;) This is the dramatic version.

So…., this weekend we had the great opportunity to join the european youth award festival, to participate as speakers for saturday’s dragon’s den. This was a short presentation of max. 5 minutes, where competitors tried to convince the jury of their idea. The jury consisted of members from the automobile industry and a member of the local government of graz. Their task was to ask the fiercest questions to make our life more challenging and to show our potential weak points. We had to defend ourselves (escape the dragon) and in the end, the audience voted for the best defense. Not this time… but wait… we’re prepared now :)

Thanks to all these people we had a chance to chat with, for the input and the chance to strengthen our idea!

Calm our wounds in the irish pub.

Some impressions of the event:

GreenЯ made it to the Top 5 of the World Youth Summit Award!

Yes, we are offically runner ups of the world youth summit award!

The International Winners’ Ceremony Will Be Held in Colombo, Sri Lanka, from October 24 to 26th

Salzburg, Austria; September 24th, 2013– The World Summit Youth Award (WSYA) has announced the 12 runners-up of its sixth edition and Austria‘s digital platform GREENЯ is among them. Selected as the one of the best five projects in its category, the application will be awarded along the winners of the competition for its outstanding contribution to the achievement of the United Nations Millennium Development Goals through online creations.

GreenЯ is a mobile app that wants to form an awareness of economical driving. This is achieved by a visual feedback of the current driving behavior, which is represented in the form of a color change of the road. When the driver has an economic driving it appears green, blue for non-economic. So the driver immediately receives direct feedback on his current ride. In addition to that, GreenЯ determines an average value of all driving behaviors of all participants. So, the more people drive economically on a specific road section, the higher the probability that it will appear on the map in green.

The competition was fierce in 2013. Initially, 422 projects from 147 UN countries were submitted. From those choices, 12 projects will be featured as WSYA 2013 runners-up through the award network and 18 will be awarded in the winners’ event that will take place in Colombo, Sri Lanka.

Next Step: Winners’ Ceremony and WSA Congress in Sri Lanka

Hosted by the Sri Lankan Information and Communication Technology Agency (ICTA), the winners’ ceremony will be celebrated within the World Summit Youth Award Global Congress 2013, a 3-days event (October 24 to 26th) that will feature world-class keynote speeches, hands-on workshops and engaging panel discussions about social entrepreneurship and the content industry.

Six categories to spark innovation and change the world

All these products –websites, mobile applications and media platforms– were evaluated for their contribution to the achievements of the UN Millennium Development Goals (MDGs) and their capability to harness the power of technology for social improvement. The products were separated in 6 categories: Fight Poverty, Hunger and Disease, Education for All, Power 2 Women, Create your Culture, Go Green and Pursue Truth. In the first round, the Online Jury shortlisted 64 projects out of the 422 submitted to the sixth edition of the contest. Under the guidance of Chairman Peter A. Bruck, the international board has finally voted the 18 winners and 12 runners-up of the WSYA 2013. The complete list can be found at www.youthaward.com

Established in 2005, The World Summit Youth Award (WSYA) is a leading international competition honoring excellence on the use of Internet for social empowerment. As an annual contest it seeks to motivate young people under the age of thirty to actively contribute to the achievement of the United Nations Millennium Development Goals. The MDGs were set in 2000 by the UN to prompt member states and civil society to fight poverty, hunger and disease, inequalities, lack of education and environmental degradation.

World Summit Youth Award: It’s official, we applied to it!

The last nights (of the last months) were spent on finishing GreenЯ, and we’ve done it.

Have a look and enjoy our application video:

Due to summertime, we take some vacation before continuing on new tasks. Lots of ideas are waiting for action.

….seriously. Just testing, what happens if the accuracy of the GPS is not that good. And how it would be, if hundreds even thousands of tracks with different accuracies should be recognized as located on the current street. Well, it was quite a task, to find an algorithm which recognizes all current tracks, for every direction around the driver (think of crossroads). I’m proud to present this progress, because it is one of the critical points of this project. Now I’m able to process tracks from a remote database, to visualize their economic impact on the current street. The amount of tracks doesn’t matter any longer for the visualization, which shows an aggregated track of all tracks and their economic value.

So, there was quite a lot of work to do, but now the first prototypes show some progress! The latest version is able to record my tracks, which are colored by fuel consumption. The cool thing, when you start a new track, all recorded tracks in your area (map region) are loaded and visualized on the screen. Still there are lots of use cases left to solve, but milestone 1 (getting car specific consumption data and visualize it on a map) is done. Finally :)

By the way, getting more and more into it, the name of the project (and app) changed to….

After nearly 2 years, I revived an idea of the “Green Street Project” which I described in my master thesis from 2011.

The Green Street Project should motivate drivers for a more economically driving through the awareness of the community’s driving behavior. To reach this goal, the driver will be notified via visual feedback, how people drive on this specific area of the street. Every driver contributes to the “green state” of the street through his/her driving behavior. In the first place, the “Green Street Project” does not target to educate the driver, but to motivate the driver to take action, which is in my opinion the very first step (and most effective) to change behavior.

My first attempt is to create a mobile application, which is connected to the car. Interpreting the car data via ODBII interface, my goal is to calculate an “eco value”, which is the contribution to the community’s behavior on the specific location on the street. So,… this will be a challenging part for the next weeks ;)

Get a promo code for a free full version of zapDial! 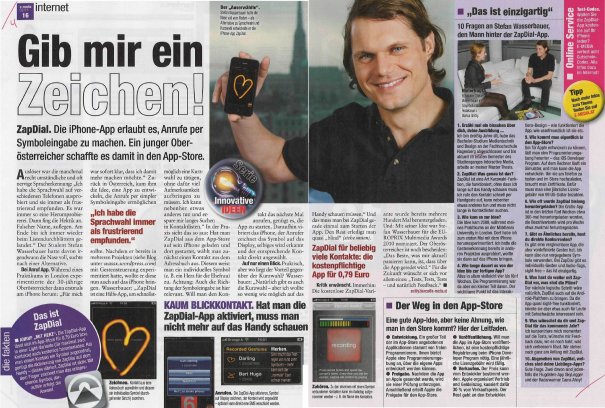 Like Loading...
Tagged with: e-media, gesture, gesture dial, iphone, recognition, zapDial
Posted in Uncategorized
Get one month of membership for free!

I am a member of the Interaction Design Foundation – get one month of free membership if you sign up via this image!